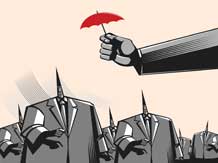 Insurers’ claim ratios have even exceeded 150 per cent in certain periods in this space meaning that the claim amount exceeded the premium collected.

Private general insurers are looking to reduce their exposure to commercial vehicle motor insurance, owing to high claims in the segment.

Insurers’ claim ratios have even exceeded 150 per cent in certain periods in this space meaning that the claim amount exceeded the premium collected.

The chief executive officer of a mid-sized general insurer explained that several of them have begun to focus to private cars rather than commercial vehicles.

Since third party insurance pricing is controlled by Insurance Regulatory and Development Authority of India (Irdai), every year the premium is revised.

However, keeping customers in mind, the regulator does not make very steep hikes in premia. Claims and court decisions or awards have seen a 30-per cent rise year-on-year.

“Commercial vehicles’ claims are directly affecting our books. Hence, it is imperative that we go slower in this segment,” said the head of underwriting at a general insurance company.

The regulator had also proposed that every insurer, during a financial year, shall underwrite such minimum percentage of the 90 per cent of the overall motor TP insurance business premium of the industry for the immediate preceding financial year.

Also, it was prescribed that no insurer shall refuse motor TP cover to any individual/entity that approaches them.

It is expected the obligation of the insurers to underwrite motor TP risks based on a broad approach taking into consideration several relevant factors would ensure equitable distribution of this responsibility.

Even after the third party pool for commercial vehicles was dismantled and declined risk pool was set up, the woes of general insurers are far from over.

Combined ratios (ratio between premium collected and claims paid) for the motor insurance segment, have stood between 150 and 160 per cent for the industry.

While motor policies are being envisaged for the segment, general insurers are wary of these products, especially in commercial vehicles category, since it is understood that pricing cannot be revised in the midst of the policy being in-force.

It is estimated that the combined ratio for motor insurance might even cross 200 per cent by FY17, on the back of higher claims, especially from commercial vehicles.